The modest Chateau at Oregon Caves is a relative youngster among the great National Park lodges. Not only is it one of the youngest, it is probably the smallest of the top quality lodges.

The Chateau is, of course, larger than it appears. Its setting and design gives it the appearance of a modest, two-story building. With very little footprint to build on, designer Gust Lium effectively took a large building, turned it on end, and stuffed four stories of it down into a ravine. From the back side, the Chateau indeed looms large over the creek it stradles. But from the front, it's just the quaint little lodge with the peaky dormers.

Getting to the Chateau is a bit of a trek. The road snakes out of the valley, first past the usual wineries and farms, and finally into a remote world of steeply pitched, pine covered mountains and canyons. The Oregon Caves peek out from the side of one of these steep ravines, and the Chateau is perched just below the cave entrance. By the time you reach it, it seems as if you've left civilization far behind.

Above, this vintage view is little changed today; from the "front" the Chateau appears to be something like a large house. The 1950s era photo below of the "back" gives some feel for the bigger picture. 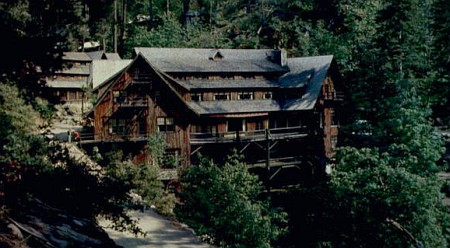 Unfortunately most guests are too harried to fully appreciate the quieter, gentler pace at the Chateau. Tourists tend to crunch too many activities into too short a time period. Oregon Caves National Monument is usually scheduled as a stop between the Oregon coast or Redwood National Park, and Crater Lake National Park. Time becomes compressed; a single night is grudgingly set aside to "enjoy" the little Chateau that they've heard so much about. The cave tour is scheduled for the afternoon of arrival, and the evening is spent at the Chateau...waiting to go somewhere else.

Upon arrival, the first timer is usually underwhelmed. Nestled in a canyon with driveways and retaining walls seemingly everywhere, the Chateau sits hard by the road and seems cramped. Parking appears to be at a premium (it isn't) and people are often sitting around as if waiting for a bus. Entering the building, the lobby fails to impress the harried traveler, and to the untrained eye, the furnishings seem to be something from your grandmother's basement. Was this a mistake?

Hold on a moment...let's decompress and try this again.

Upon arrival, it's better to recognize that you've entered a tiny community on a remote mountainside. Instead of the sterile visitor center at many of the cave tours in the NPS, this one features a couple of amazing rustic buildings. A fortunate few will be staying in one of them, the Chateau. And if you're smart, you'll stay for at least two nights.

Entering the lobby, the reception desk is understated, low-key. Staff is friendly, but noticeably lacking the crisp "sign here, initial this, certify that, these-are-the-rules-give-me-your-credit-card" and forced smiles so common at the larger lodges. You're at the Chateau...decompress.

The furnishings are not the cookie-cutter mass produced replacement rustic found at so many NPS lodges today. They are original, and as such appear a bit tired and dated. Look a little closer, and you'll see that the furnishings adhere to a unique style that somehow conjurs images of early 20th Century California. The style, rather hard to find these days, is called Monterey. The best examples were hand crafted in California, and the best surviving collection is the living museum before you. Best of all, it's yours to use and enjoy during your stay.

Of the great National Park Lodges, the lobby at the Chateau might be the closest to perfection. It is not so small that you have to fight for a seat, and it is not so large that the experience becomes impersonal. It somehow manages to provide seating that lends itself to conversation, tables for cards or board games, yet also quiet nooks for reading or snoozing. Although a few guests only speed past this area on their way to and fro, it is probably the highlight of the Chateau. Spend an hour in the lobby, and you're likely to wish you never have to leave.

Above, a portion of the lobby showing the grand rustic staircase. Photo by Laura Soulliere Harrison, National Park Service.

And that's just the start. As wonderful as the lobby is, the massive staircase beckons. "Up" leads to the understated rooms, "down" to The Coffee Shop, a fabulous lunch counter that is virtually unchanged since it was originally built. It's a quasi-underground room with knotty pine panelling, chrome and vinyl seating, and soda fountain that completes the time machine effect.

The dining room is more formal. Well, not really. Compared to many of the great lodge dining rooms it is small, simple, and quiet. It is famous for the fact that part of the stream runs through it; even that is done in an understated manner. The experience is not a great gastronomic phenomenon, more like breaking bread in a peaceful, unharried environment.

The Chateau at Oregon Caves is NOT a "grand" hotel. But it is one of the gems in the National Park system, and once you strip away your expectations and pedal-to-the-metal schedule, The Chateau reveals itself as perhaps the most charming and relaxing lodge of all.

No telephones, no television, no internet.

As stated above, a full appreciation for the Chateau at Oregon Caves begins when you leave your expectations -- and your wristwatch -- at home. None of the rooms are luxurious, but it is worth the added cost to upgrade because of the size and sometimes number of windows. A recommended plan is to arrive prior to dinner, enjoy that and an evening in the lobby, saving the cave tour for the next morning. Following the tour on day 2, lunch in the coffee shop, then hiking. The nearby hiking trails are strenuous but spectacular. Finish your exploring by mid-afternoon, and spend the rest of the day relaxing around the Chateau. Dinner again in the dining room, topped off by a card game or friendly conversation in the lobby.

It's a fantastic experience.

A stay at The Chateau at Oregon Caves is an unforgettable experience; the design and decor is an important example of National Park Lodge architecture. Time spent anywhere in this lodge and on the grounds affords you new sensory experiences, sights, and discoveries. Judged solely on public or common areas, external appearance and ambiance, the Chateau would easily earn "criterion" status. Because we must consider all aspects of the facility, The Chateau is ranked "superior," the second highest classification by the National Park Lodge Architecture Society.

NPLAS  Dedicated to the Preservation and Appreciation of National Park Lodges 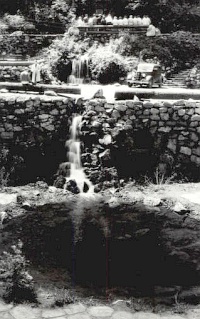 The "waterfall" and trout pond, a fixture in the Chateau courtyard.

Please remember that your Amazon.com purchases help fund the NPLAS website, at no additional cost to you.