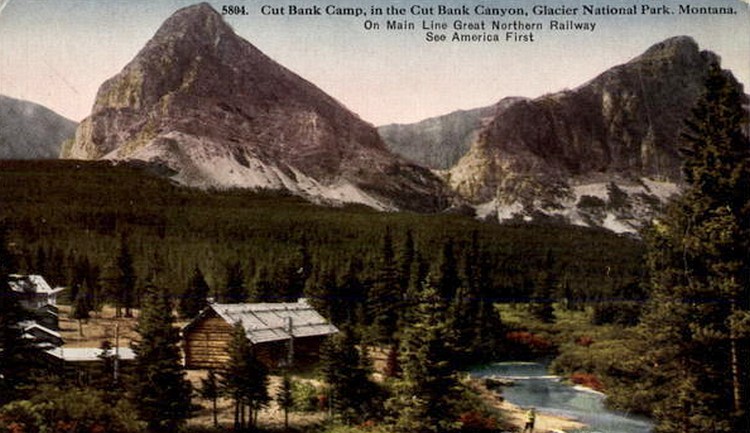 The main attraction of the Cut Bank Chalets was trout fishing. Anglers sought out this spot even before Glacier became a National Park; guides were hired to bring sportsmen in and set up camp. Louis Hill recognized this, and the Teepee Camp at Cut Bank was one of the Great Northern's first tourist offerings in the new park. The Teepees consisted of canvas replicas of the real thing, with the added comforts of cots, chairs, lanterns, table and wash basin.

The lodge was built quickly, and by all indications was to remain little more than a fishing camp, although some aspects contradict this. The toilets were simple outhouses, but the dining tables were fitted with fine linens. In any case, it seems that management treated Cut Bank as the least important of the chalets.

above, this hand-colorized image is of a staged Blackfeet Indian encampment circa 1913 that was located on the trail above Cut Bank Chalets.

The History & The Experience

Today the Cut Bank location is easily reached by a graded road. Scenic and uncrowded, it remains a key destination for anglers, so it is difficult to imagine that a lodge would be an unsuccessful venture.

In the first decade of operation, Cut Bank was anything but a failure. Pack trips were extremely popular at the time, and the Chalet was frequently full. A trail connecting Cut Bank to Two Medicine was opened in 1915, which brought even more traffic to the valley. Workers and guides stayed in an adjacent camp, and the entire complex was a busy and vibrant place through the mid 1920s.

By 1925 the use of automobiles for touring was a runaway train, ready to derail the real ones. Just a few years earlier the idea of visiting National Parks by car was a novel concept to say the least. It was a treacherous, difficult undertaking, limited to those with time and training to make repairs to virtually any mechanical part of their vehicle. The catalyst for this new auto touring was a park-to-park road trip in 1920, a quasi-barnstorming tour led by various NPS personnel and early AAA members. The group had sponsors, and met with civic leaders in each town to preach the gospel of good roads. The Great Northern Railway worked to promote its chalets to auto tourists -- with the notable exception of Cut Bank. Business was so strong that brochures didn't mention that an eminently passable road led right into the Cut Bank valley. In fact, in 1926 the Great Northern erected a substantial tent camp at nearby Red Eagle Lake to handle overflow visitors, especially anglers, who found the fishing better at Red Eagle anyway. These sportsmen opted more for adventure than comfort, and often preferred staying at Red Eagle. There was enough business that management briefly considered establishing another chalet complex at the lake.

Unfortunately by the late 1920s the car was so popular that the Railway's lack of promotion for Cut Bank had backfired, and by 1930 only the anglers were visiting. This would've been sufficient, except that the fishermen were mostly using the tent camp at Red Eagle Lake. The Great Northern had effectively put its own Chalet out of business. The guest count dropped steadily, and by 1933 the pre-opening reservations were so sparse that Cut Bank closed completely.

Following the worst of the Great Depression, visitors began returning to the National Parks, but the Great Northern was still facing a situation in which it had too many chalets and hotels to operate all of them profitably. The Railway was quite hesitant to re-open the three that had suffered most from the advent of the automobile -- St. Marys, Going-to-the-Sun and Cut Bank. In the end, marketing efforts were redoubled for Going-to-the-Sun, and it reopened with a flurry of advertising. St. Marys was turned over to an art school, and stumbled along in that capacity for a few years. Meanwhile George Noffsinger, the concessionaire for the Park's Inside Trail pack rides, approached Great Northern about opening Cut Bank as a dude ranch. It is believed that this was attempted in 1937, but was unprofitable. Cut Bank closed permanently in 1938.

above, one of the single-room cabins at Cut Bank Chalets. There were only four known buildings in the complex.

During its brief history, Cut Bank probably had the most "relaxed" atmosphere of the Great Northern Chalets. It was smaller, and because the lodging was so rustic, guests frequently continued on to St. Mary Chalets. Thus it was mainly a haven for fishermen who -- unlike hikers and sightseers -- are not constantly on the move and hence less harried. It was a quiet place of meadows, forests and the river, set amidst a dramatic alpine location.

Cut Bank Chalets played a brief but important role in the history of lodging at Glacier National Park. It is classified by the NPLAS because of its historic significance and one time preeminence as an alpine lodge. Efforts should be made to gather information and data to better preserve the recorded history of the site.

NPLAS  Dedicated to the Preservation and Appreciation of National Park Lodges

The only buildings remaining from the heyday of the Cut Bank Chalets are those at the Ranger Station. Located down the road from the lodge site, this was the main ranger building. It was constructed in 1917 to provide NPS representation in the increasingly busy Cut Bank valley. This structure has been altered since it was originally built, but it does provide a visible connection to the past.

A hand-colored photo of the original chalet building.