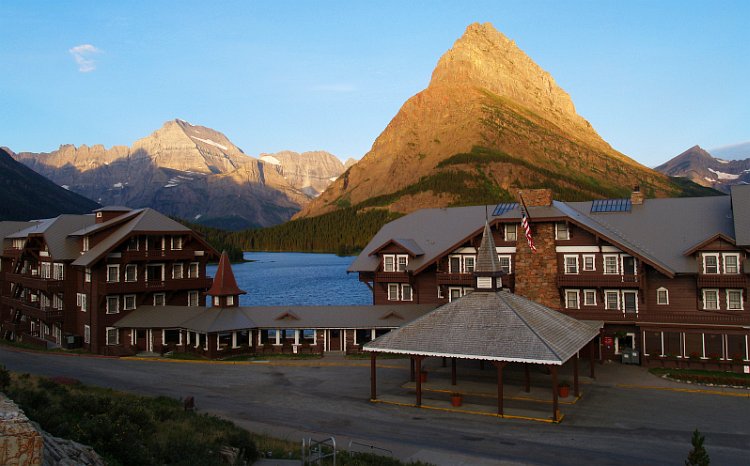 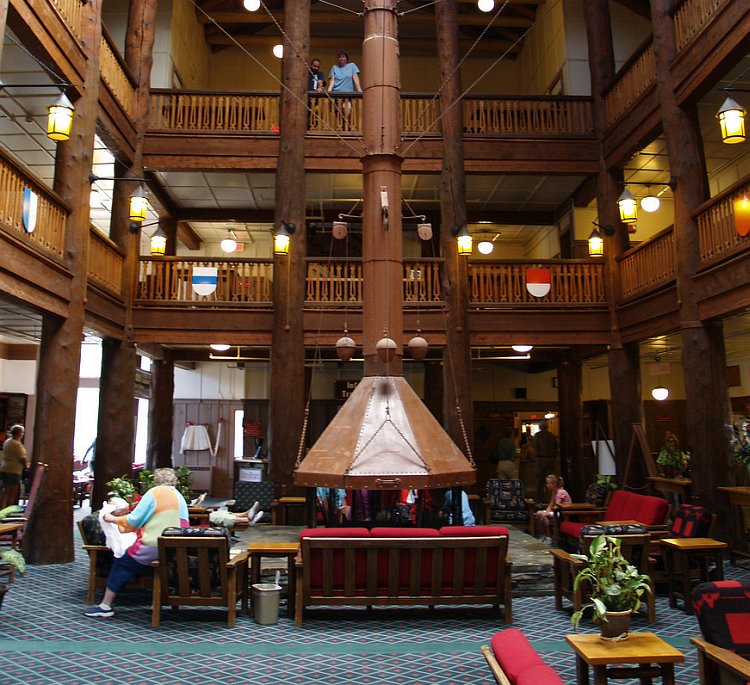 Many Glacier Hotel was planned to be the crown jewel of Louis Hill's Great Northern Railway development in Glacier National Park. With the arguable exception of Crater Lake Lodge, the setting of Many Glacier is probably the most photogenic of the great National Park Lodges.

above, 1920s era colorized image of Many Glacier shows what the hotel looked like prior to construction of the porte-cochere. Compare this image to the large first image above, taken from virtually the same spot.

Unfortunately the remoteness of the lakeside location in 1913 made construction a challenging proposition. The logistics of moving men and material into the alpine valley were sometimes out of sync. But the overwhelming problem was that winter arrived and lasted longer than expected, and some materials were substituted or replaced. As a result the construction of Many Glacier Hotel used a combination of costly timbers and cheap composite board.

The result was a drafty, creaking monstrosity that was added to piecemeal over the next few years. When it was completed, proponents used the word "rambling" to describe it; detractors changed the word to "ramshackle."

In the original layout of the lobby, a striking spiral staircase was located opposite the open hearth fireplace. This staircase, which led to the basement, was removed during the 1950s reconstruction. Notice the Victrola and wicker chairs on the left side of the photo. More significant is the original decor: A mix of cattle skulls, Chinese lanterns, and animal pelts draped on most of the railings. This contrasts heavily with the current view below, which has none of the skulls and furs. The Oriental decor was removed during the 1930s. Photo below courtesy the National Park Service. 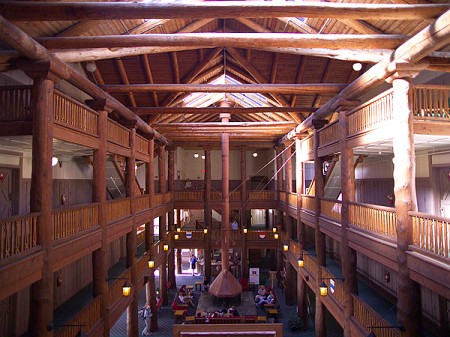 Because of the "Swiss" exterior that Hill conceived, the hotel fits the lakeshore and the setting nicely. By using this chalet style, its appearance draws on centuries of preconceptions of what a high alpine hotel should look like. Almost any other style building of this size would be horribly out of place. We're fortunate that Many Glacier was constructed when it was; without railway riches it is hard to imagine any other time that it could've been. Certainly today's environmental movement would render such a hotel little more than a pipe dream. 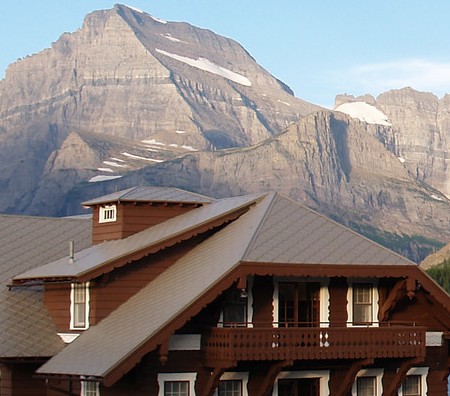 Notice how the multiple angles of the chalet's rooflines work in concert with the angles of the peaks beyond. Even the jigsaw Swiss styling replicates the runnels in the rock forms. Mike Wasson photo.

While the location so close to the lake is alarming to some, it actually lessens the impact of the structure. The steep bank dropping to the lake allows the front portion of the buildings to be below ground, giving the impression that the buildings sprang from the earth and remain tied to it. It is only when viewed from the lake that Many Glacier reveals how truly immense it is. And from that vantage point, the backdrop of the mountains minimizes what would otherwise be a monstrous appearance. 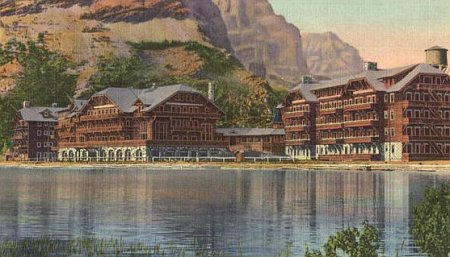 This vintage image reveals a much larger hotel when viewed from the lake.

Alpine hostelry. . .in the Switzerland of North America

The key thing to note in this headline is the "hostel" part. Many Glacier Hotel was designed as a massive Swiss hostel, that is, dormitory style rooms with shared bath facilities. If you aren't familiar with this style of lodging, you basically would choose between a bed in a bunkhouse, a private room, or a suite. The "suite" as it was in 1913 was often smaller than a typical hotel room of today. Private rooms usually had a sink; suites may or may not have a tub. Some suites might have toilets. Everyone else used shared restrooms and showers. Showers were usually located in individual "closets" throughout the building. These had a locking door, a tiny changing area with a wood stool, and a small shower stall. You might've found three such showers on your floor, or you might've had to walk to another floor to find one. Only the wealthy in their costly suites had the luxury of a private bath in their room, which usually consisted of a claw-footed tub located behind a screen.

This type of lodging arrangement was quite common and accepted when Many Glacier was built, but began to fall out of favor during the 1920s and 1930s. As Americans became more mobile, efficient roadside "motor hotels" with small but private showers and baths sprang up, and expectations began to rise. What was once common and accepted slowly became archaic. The hostel style fell from grace completely by the end of World War II, as Americans no longer living in tenements began to demand the separate privacies they enjoyed in their new suburban tract houses. Americans were also being warned more and more about the horrors of some unseen organisms called "germs," and the perception was that private baths would be much more sanitary. (Incidentally, if you are fortunate enough to procure the vastly discounted lodging at Bright Angel or Paradise Inn that requires use of a shared shower, and are perhaps concerned about those dreaded germs, a quick spray of common white vinegar will probably render things more germ-free than your home shower with weekly cleanings.)

By 1950 change was overdue at Many Glacier, and the concessionaire began a series of modern upgrades and additions that included individual room baths. Like the upgrades at sister hotel The Glacier Park Lodge, this was accomplished with minimal decrease in the total room count. The resulting rooms were just fine for the 1950s. Unfortunately many travelers today are put off by the tight quarters and complete lack of luxury. As good as the impression is upon entering the lobby, visitors are sometimes mortified by the -- how can we put this delicately -- spartan guest rooms.

A warren of corridors, stairways and balconies reinforce the impression that this is a quirky, rambling structure. Again, some guests are put off by that, but most accept it as part of the history and a refreshing change from the sterile big boxes that hoteliers construct these days.

It is these and the rest of the public areas that give Many Glacier its unquestionable charm. Between the rustic lounges, informal dining room, lakeside verandas, balconies, and the incredible lobby, the Many Glacier Hotel is absolutely delightful...mind-boggling in its scope and artistic, rustic beauty; it staggers the imagination.

And we haven't even begun to discuss the scenery.

An overnight stay at Many Glacier Hotel will be an unforgettable experience; the design and decor is an important example of National Park Lodge architecture. Time spent anywhere in this lodge and on the grounds affords you new sensory experiences, sights, and discoveries. Judged solely on public or common areas, external appearance and ambiance, the Hotel would easily earn "criterion" status. Because we must consider all aspects of the facility, Many Glacier Hotel is ranked "superior," the second highest classification by the National Park Lodge Architecture Society.

NPLAS • Dedicated to the Preservation and Appreciation of National Park Lodges

This 1916-era "colorized" photo depicts the Oriental styling that was considered "western" in the early 20th century. The furnishings used today in the Many Glacier Hotel create an atmosphere of vintage relaxation, but are not accurate to any previous styles used.